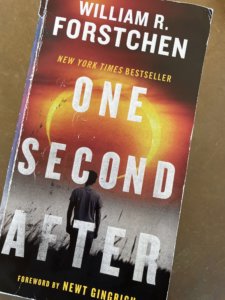 My son handed me this paperback during the pandemic. Here, Mom. I think you’d like this book. I read at night before bed. This book gave me nightmares.

And…I did like this novel, mostly. Here are 5 Reason I recommend ONE SECOND AFTER

And now for my longer review…

ONE SECOND AFTER, rated PG for some violence, is the story of a mountain community outside of Asheville, North Carolina post EMP attack. In this story, multiple electromagnetic pulse weapons are discharged in the atmosphere above the US, frying all electronics/microchips, etc. Thousands of planes crash, including Air Force 1, killing the president and his entourage…cars stop working (except for the older ones that have no electronic parts) and all modern forms of communication break down, including radio. Add to that no computers, no cell coverage, no refrigeration, no transportation, no heat or cooling, and you put most of the population on a quick path to discomfort, starvation, disease and lawlessness. This story is The Walking Dead, but without the zombies (unless you put desperate people willing to eat human flesh to survive in the same category as zombies).

I did watch most of the The Walking Dead and it became clear after a few seasons that the zombies were not the ones keeping humanity from becoming civilized again, it was regular “alive” people with education and supposed morality who were often the worst perpetrators of horrors. This novel follows the same vein.

The characters I found most interesting were those who tried to lead the group with some semblance of morality and decency. Sometimes, those characters felt a little contrived, but most of the time, I believed they could exist in the real world and appreciated how they were tempted regularly to abandon the Constitution, rights, and a sense of justice. Running a mini-dictatorship made more sense than all the work involved in self-governing, yet they persisted.

One poignant reality in the novel world is that because all trade has come to a standstill, there are no new meds to “take care of” human problems. Everything from a small cut, to heart disease, rotting teeth and diabetes have the potential to be a death sentence. Eventually, mental health is also a part of the discussion when the town elders realize that they might have to imprison or restrain those who might endure psychotic breaks from reality. So many people die in this story, but most die from either starvation or from lack of medicine and that was an interesting reality to ponder.