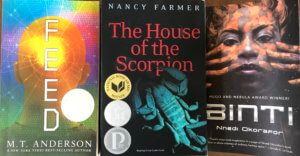 THE HOUSE OF THE SCORPION, by Nancy Farmer

THE LORD OF OPIUM, by Nancy Farmer

BINTI, The trilogy by Nnedi Okorafor 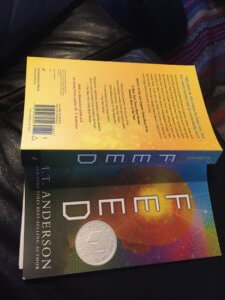 While on the Moon, Titus meets Violet. Initially, physical attraction drives his desire to be with her, but when an event disconnects Titus, his group of his friends and Violet from the feed for a few hours, their bond takes on a deeper hue. Violet is not from his social class and was not connected to the feed at the earliest age possible. Her hippy, intellectual parents resisted putting the feed in her brain for as long as they were able, homeschooling her for a time (since education happens via the feed). As a result, Violet knows about the world in ways Titus and his friends don’t. She has developed critical thinking skills and keeps current on news, including the broad unrest that is taking place across the globe.

If you need questions for starting a discussion, see my post FEED, by M.T. Anderson Discussion Questions for Educators