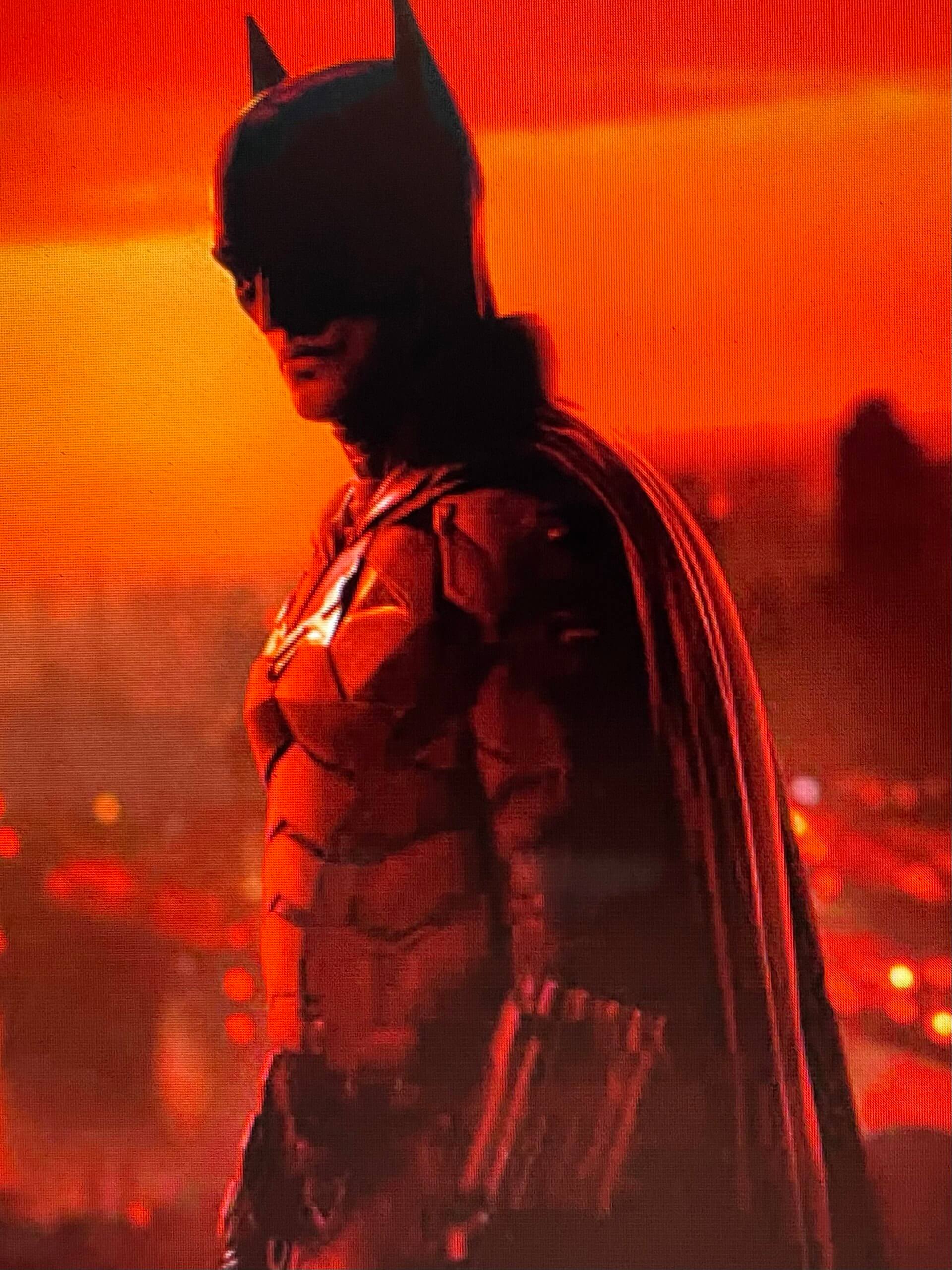 Last night I had the privilege of watching Matt Reeve’s THE BATMAN. I enjoyed the film, though it was tough to watch, a tense experience. Graphic violence is implied more than shown, but evil and darkness are palpable in every scene. Not that the film isn’t a beautifully crafted story…it is, but the narrative, the special effects and dingy, but stylized setting of Gotham give evidence of evil in every frame. It’s pouring rain and night during most of THE BATMAN and of those scenes shot in the day, skies are gray.

Of course, this is a familiar setting for our comic book hero, the Dark Knight, but what is less familiar is the tone of utter hopelessness associated with that darkness. Violence plagues the city of Bruce Wayne. In the opening sequence, it is Halloween night and masked hoodlums run wild across Gotham causing mayhem, and at one point a gang of them threaten an Asian American man in a subway station, hitting too close to home for many of us. Halloween is also the night the Riddler commits his first murder. 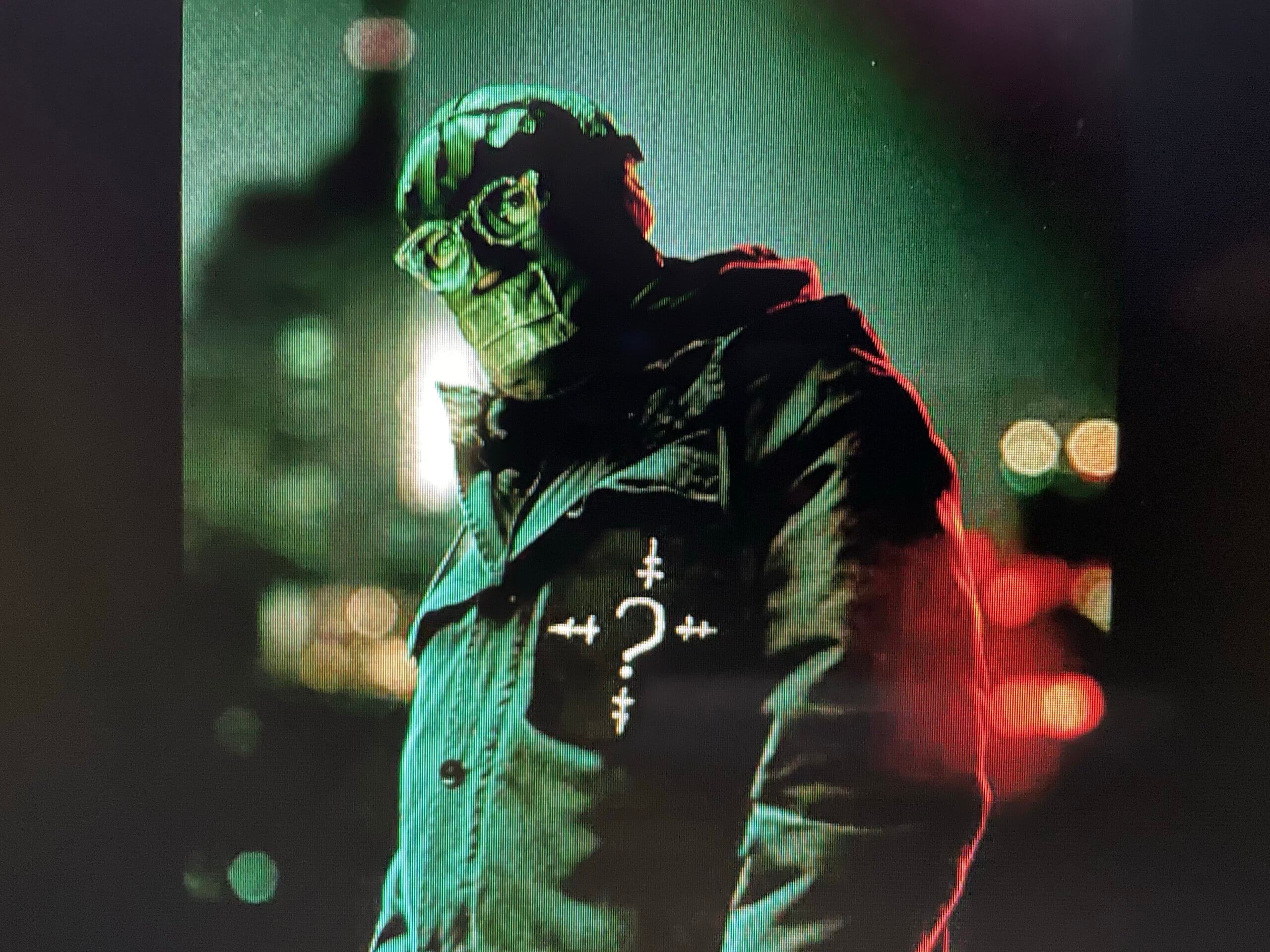 The brutality of humanity is on display in THE BATMAN, begging the question: When is a society so corrupt, so evil, so far gone, there is no hope of renewal and it must be destroyed?

Batman versus the Riddler draw out this theme because in certain respects, both men are the same. Both are trying to root out corruption, Both are straining toward a just society. Batman roots out injustice by defending the good guys and working within the system. Though outside the formal police force, his link to Lt. Gordon cannot be denied, nor can anyone doubt his insider status as Bruce Wayne, the orphaned son of a beloved city father. The Riddler however, also an orphan, stands on the outside. He roots out evil by exposing it, by punishing via execution and making a public example of those who have betrayed justice. The Riddler’s first murder is the mayor of the city and subsequently other politicians and law enforcement, those caretakers of Gotham who have made their beds with the mob. Because of these assassinations and the attention he draws to corruption, Batman along with the audience are forced to focus on what is a massively broken system at the highest levels of the city.

The audience wonders whether ANY politicians or police are clean in Gotham, and can such evil be undone when the gatekeepers of justice have become those who perpetrate injustice? The Riddler sees no way out but total destruction.

On the narrative journey, Batman faces truths about his own father. The idealism with which he has viewed his parentage is shattered, evoking for me the psalmist’s words from Psalm 14, text lifted by the Apostle Paul and placed in his letter to the Romans.

The fool says in his heart, “There is no God.”
They are corrupt, they do abominable deeds;
there is none who does good.

2 The Lord looks down from heaven on the children of man,
to see if there are any who understand,
who seek after God.

3 They have all turned aside; together they have become corrupt;
there is none who does good,
not even one.

Why do I include this? I think Reeves is trying to make a theological point. I bend toward theological rather than philosophical because the powerful reality (loaded imagery) at the end of the film is a flood…as in Noah and the Biblical account of the destruction of evil.

In THE BATMAN, the Riddler has set up bombs that line the seawall on Gotham’s perimeter. The Riddler has determined that Gotham is irredeemable. Gotham must die, drown or be cleansed of its evil if the water imagery is to be understood. Only then will it be reborn. A flood to destroy evil? This is as old a tale as humanity, understood within Judaism, Islam and Christianity as that time in the past when society was so broken, nearly every living thing had to be destroyed in order for evil to be rooted out. The Riddler sets himself up as God and judge. He determines that Gotham is a total loss. Total destruction is the ONLY remedy.

Batman represents another side of this argument. Don’t miss the fact that Selina (the Catwoman character wonderfully portrayed by Zöe Kravitz), tries to coax Batman to remove himself permanently from Gotham. I can’t recall her final words to Batman precisely, but they were something like…staying here and trying to save Gotham will kill you.

That comment is an homage to a redemptive sacrifice and Batman as Christ figure…sort of…The audience already knows how much life has been sapped out of the young Bruce Wayne because of his mission to avenge his father but also to help Gotham. Batman’s motives are often mixed here. Interestingly, this Batman, the Reeves’ Batman grows. He realizes that vengeance is not the full story of how he must respond to evil. To truly honor his dead father and mother, he must do more. He must minister good to the people of Gotham. Two images of Batman in the final scenes make my point. One is him diving into the abyss, lighting his flare and leading innocent people by hand, out of the flood, out of judgment. The other is him helping a wounded girl on a stretcher and holding her hand as she seeks his assurance and is flown away to safety, to healing. Why the hand? There is something about connection to humanity with the touch, a touch that is gentle, not violent. 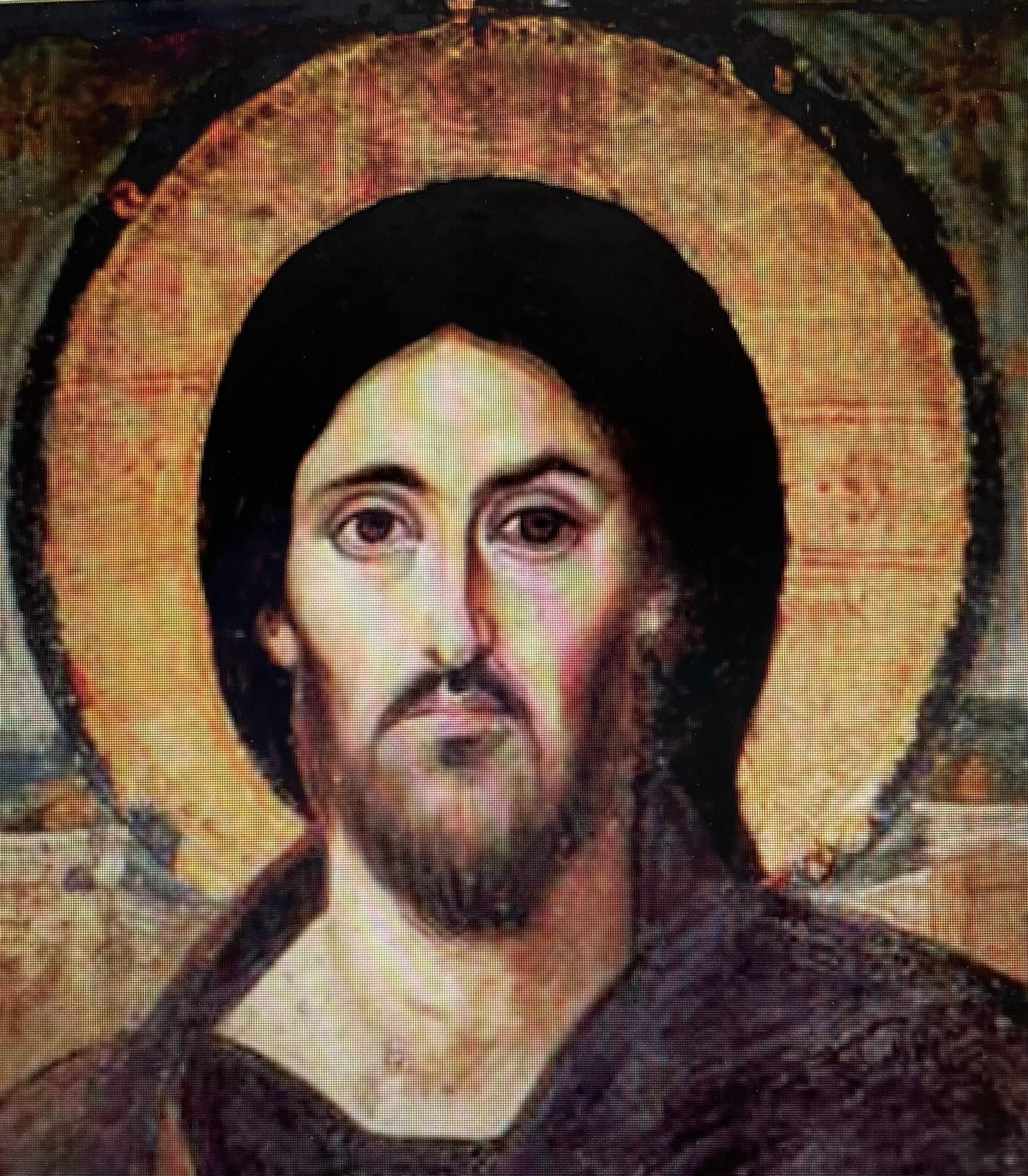 The Russia Ukrainian War is raging as I write. Yesterday, Russian planes targeted a bomb shelter in Mariupol, a place holding hundreds of children and women. On the ground on either side of this structure, the Ukrainians had written in Russian the words “children” in very large script, large enough to see from the air. How do we as a society grapple with such evil and the destruction of so many innocents? (The number of dead is still undetermined…I will correct this when the fog of war has dissipated.)

So, I end with this image, Jesus of Sinai, Pantocrator, an icon from the the 6th century. For Christians of the 6th century, most of whom were illiterate, icons like this were essential to their faith because embedded within each icon are theological truths. For them, looking at an icon was like reading a holy text. With Jesus of Sinai, notice the weird lighting on his face, one darker side and one side lighter. That is intentional. Why? The post-modern viewer might not discern what his face represents but to early Christians, they represent two sides of the creator as God looks out over humanity. If you put up your hand and cover one side of the Messiah’s face, you see a bright and compassionate mouth and eye. When you cover the other side, you see a darker eye, an angry glare. The iconographer and the theologians of that time understood that both are legitimate sides of God and both are legitimate responses to a broken humanity. The story of God as laid out in the Bible is of God grappling daily with a society gone wrong. On one hand, he is merciful and forgiving, on the other, he is vengeful and ready to punish. Both are legitimate responses to the problem of evil. Current people of faith struggle with that darker view of God but might do well to ponder it. Noah and the flood tell its story as do Jesus and the cross. And here we see the author of the new Batman series exploring both reactions to evil, but favoring mercy in the end.

We live in a complicated world, but some truths/questions find their way into our art, even if that art is embodied by a comic book character.

Kudos to Reeves for attempting something really big in his portrayal of THE BATMAN.