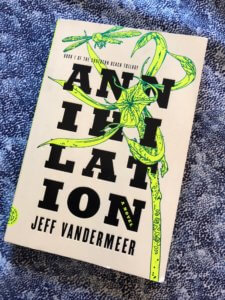 Book 1 of the Southern Reach Trilogy

ANNIHILATION, Review of the novel

“When you see beauty in desolation it changes something in you. Desolation tries to colonize you.”

The above observation comes to the reader early in ANNIHILATION and is a good representation of the reflective narration of this creepy science fiction novel, a book I highly recommend to the scifi lover.

Here’s the short review on why I recommend the novel. If you want to read the longer review…it follows immediately after the list.

ANNIHILATION tells the story of an all-female expedition into an alien eco-system that has planted itself on a stretch of coastal Northeastern US. The reader learns quickly that most of the people within previous expeditions have disappeared into this anomaly, a place labeled by the government as Area X. Only a few have returned, including the protagonist’s husband, who was on the 11th expedition and died from cancer soon after his return.

The primary narrator, also the protagonist of the story, writes the account in her journal. She is the biologist and is never named. None of the primary characters are named, but exist in the story via their function. We see all of Area X through the biologist’s eyes. In addition to her, this 12th expedition into Area X is made up of a psychologist, a surveyor (former military) and an anthropologist. The story opens with the expedition already underway. The four women are hiking to a basecamp that had been established by previous expeditions.

There are two prominent story-lines woven together artfully by author, Jeff VanderMeer.

One is the slow-building and always tense journey into the center of Area X, where a tunnel (or as our protagonist insists on calling it, a tower) and a lighthouse need to be explored. Discoveries are made about both, as well as the environment which is filled with strange hybrid vegetation and creatures. Those discoveries deepen the mystery.

The second storyline, which gave me much pleasure, was the unveiling of the main character. As a narrator, the biologist’s observations are keen, and her attempt to understand what happened to her husband lends itself to a natural telling of her backstory. There is a love tale here, subtle, but steady. It progresses with the first storyline, marching toward the climax and a revelation on par with a religious epiphany.

In writing this review, I did want to understand the word itself, Annihilation. In part I kept looking it up because I was always misspelling it. (I was forgetting that second “n”).

Annihilate comes from two Latin roots: an and nihil, annihilare means: to bring to nothing. In Middle English and later within the church, you find the same roots in the word annulment. An annulment was a legal/religious term that ended a marriage (in essence, turned the marriage into nothing, as if it never existed).

However, the coolest definition of the word is found in physics. Annihilation is the reaction in which a particle and its antiparticle collide and disappear. Energy is then released. I’m not a physicist, so when I started reading articles on annihilation and saw the terms Higgs Boson and Quarks…I realized I was out of my league. However, it would be safe to say…that when the process of annihilation takes place there is destruction and creation. I’m assuming VanderMeer, the author of ANNIHILATION, knows exactly how this definition frames the narrative.