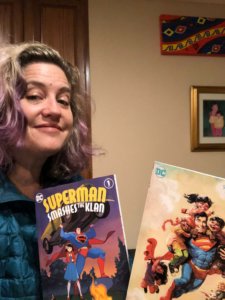 Same comic, two versions of the cover art. I bought both.

SUPERMAN SMASHES THE KLAN, written by Gene Luen Yang and drawn by Gurihiru was released exactly one week ago, Wednesday the 16th of October and understandably, it is moving off the shelves fast. I highly recommend this first installment in the three part series. I rate this series PG and would encourage parents to read it with children and discuss the many aspects of the story that are rooted in history.

Short Review: Five Reasons to Own and Read SUPERMAN SMASHES THE KLAN: 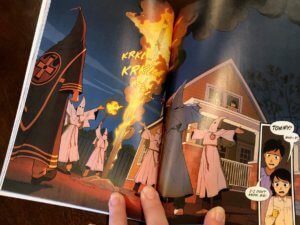 To buy this book, Part 1 of 3, you’ll need to visit your local comic book store or click here. Also, if it’s been a while since you entered a well-stocked comics store, you owe yourself the treat. Go now and browse the shelves! 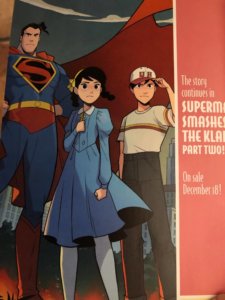 The art, rendered in fantastic color

Most science fiction fans love comics, but not all. I know a few who have avoided them in favor of novels, television and film, but the comic format has proven its heft in recent years with literary stories like American Born Chinese. Gene Luen Yang, the author of American Born Chinese, also wrote the much-acclaimed New Super-Man, in which an Asian American young man emerges as the Superman in the story. It is no surprise Yang was DC’s choice to bring SUPERMAN SMASHES THE KLAN to life. The story is an adaptation of a 1946 smaller story arc within a radio series called The Adventures of Superman. In it, an Asian-American family is threatened by the Ku Klux Klan and Superman is inspired to protect the children of this family from racist terror.