DON’T WORRY DARLING is a feature-length film, streamable on HBO after a limited release in theaters. This film, produced and directed by Olivia Wilde, provides a semi-new twist on an old science fiction trope. I won’t say what that trope is in the short review, however it is likely to be sniffed out by the scifi fan. It’s pretty obvious. Also, as typical with HBO productions, the sex scenes are explicit and emotionally intense. I give it an R rating because of those scenes, otherwise, it might have been a film the whole family could watch and talk about. Ah well…

In the film, Olivia Wilde puts to the screen a utopia in a Southern California desert, a place where beautiful couples live in a 1950s-like fantasy world. Think, Leave It to Beaver, but with racy sex.

Traditional roles underpin the community’s existence. The husbands work each weekday. The wives stay home and though some cleaning and cooking is required of them, they otherwise sip cocktails, take ballet lessons, swim, sunbathe and shop. Children are mostly absent with a few exceptions, but the overall picture is one of leisure and luxury. Hardly a problem exists until one of its female members (a secondary character) goes off the rails and displays what the leader of the community deems irrational, mentally disturbed behavior. The film audience knows that this woman’s rants are the beginning of an unravelling. 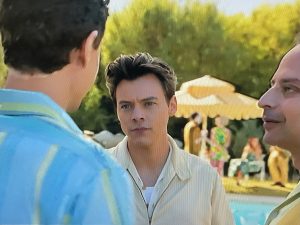 The main character, Alice (Florence Pugh) witnesses the suicide of the troubled woman, Margaret, someone she had considered a friend. In trying to help Margaret after she both slits her throat and throws herself from a rooftop, Alice is commandeered and quieted into submission by men in red jumpsuits who seem to police the community. After this, she falls under the treatment of the community’s doctor, is offered meds, and given electroshock therapy. The therapy backfires and causes Alice to remember her “real life”. Everything she is experiencing in this utopia is false, a virtual reality that her husband has committed her to, for reasons that were challenging for me to understand. In theory, her husband loves her and wants this ideal utopia for them both, but by the end, he is willing to subdue her himself, forcibly. My best guess is that he was wanting to give his wife a good life but could not in reality. In real life she is a surgeon, so some of the logic breaks down here because I could not figure out (on one viewing) how he was able to afford this virtual reality without his wife working. Possibly, the “work” he is doing each day is something illegal, and his secrecy about it is a trade he makes for a virtual paradise. However, he is basically imprisoning his wife and forcing her into an identity of his making. That is evil and perhaps Wilde is trying to show via hyperbole, how this can sometimes be the case in an actual marriage. However, the lesson feels forced to me as does the story overall.

Despite that, the film did entertain and I enjoyed the setting, clothing and hair, an artistic landscape with a story that almost measured up to the visual style.