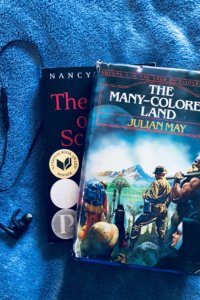 A Tale Worthy of a Listen

What to look for when choosing a book, especially if you’re a novice audiobook consumer…

Today, as I was having my teeth cleaned, my dental hygienist told me she is NOT a reader these days because of having two little girls to whom she reads all the time (a 4-year-old and a 2-year-old), but has found herself addicted to Audible when she drives, cooks and does other chores. She tells me while I am flat on my back, my mouth opened as wide as it will go,

“I fall asleep when I pick up a book to read right before bed, but during the day, I’m finding it so much fun to listen to a romance novel. I’m a sucker for a good love story.”

Audiobook listeners are coming out of the woodwork to talk to me when I indicate that I am writing this post. I don’t have enough data to know if this is a true cultural phenomena, but something is definitely percolating among us.

Like our ancestors of old, we still LOVE listening to stories. If you’re not an audio book-o-phile, consider this…

But, how will you know what will be a satisfying listening experience? Here are a few tips, my opinions on the best audio books and the ones to be wary of…

Say YES to these audiobooks…

What to avoid if you’re unused to listening to stories…

THE HOUSE OF THE SCORPION by Nancy Farmer (YA speculative fiction), great story, few characters

Audiobooks that were a challenge to listen to:

THE THREE BODY PROBLEM, by Liu Cixin  (scifi) for me, too many storylines and characters

the last ¼ of THE POWER OF HABIT by Charles Duhigg (non fiction)…it felt redundant and repetitive by the end. I quit before finishing, but I’m glad I listened to the first ¾.

THE GANGSTER by Clive Cussler, Okay…he’s a NYTimes bestseller, but I found it difficult to stomach the characters and dialogue, dominated by cliché speeches and stereotypical males/females…maybe his other writing is better?