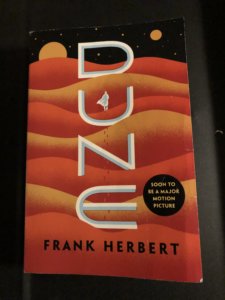 This is my second time reading DUNE, with probably about twenty years in between readings. My first took place as a fan, consuming for pleasure. This time, I re-read DUNE as a writer of science fiction. It was still a thrilling ride.

DUNE, the novel holds up well to post-modern scrutiny and the writing is mostly perfect.

This is a PG-13 story, for sexual and violent themes, although those scenes are not explicit in this novel.

The Longer Review (mini spoilers below):

When George Herbert created the character Paul Atriedes, he stumbled upon a savior-type, a hero, a character who could embody a kind of leadership that most of humanity longs for. Hero stories are nothing new, certainly not new to the science fiction audience, but great ones are to be treasured.

In the case of DUNE, Paul is not the only treasure. The people of the planet Arrakis, the Fremen, also embody an ideal. They are oppressed, but intelligent, pushed to the margins of society, but resourceful and willing to sacrifice for the cause. Their discipline is akin to the greatest armies of literature and history. They are as creative as tenacious as a Roman legion, as fierce as Khan’s Mongols and as disciplined as the Spartans.

(Spoiler here) So what is supposed to get under our skin about DUNE? How can one argue with a story where the overly confident and utterly powerful Emperor is outsmarted, out-gunned and defeated by an honorable and humble tribal people? That feels so right and good.

But there are complexities that go along with this storyline. Paul is not as pure a hero as he might seem. His role as Messiah is an idea that plagues him throughout the novel because he knows he is not simply fighting for the Fremen. He is also motivated by vengeance and honor. He uses the Fremen to avenge his father, so his victory is an uneasy one. Even as he negotiates a marriage to the Emperor’s daughter for status and honor, but keeps his Fremen lover as concubine, the audience sees the inherent politics that will inhabit Paul’s governing. How Paul will rule the Empire is a story for later books, but the seeds of the struggle are sown well and deep in the original novel. So, even as the audience breathes relief at the victory over injustice, there is more to ponder.

There is also an amazing graphic novel version which is being released book by book. Dune is made up of three sections, called books. The first installment in graphic novel form is available here. To purchase, click DUNE, Graphic Novel The second installment will be released in the Spring of 2022. No date yet on the third and final.

Lastly, the 2021 theatrical trailer is out and worth a view, perhaps best seen after reading the novel…but then, maybe not.