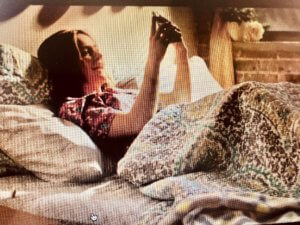 Today marks the 2nd of 8 days in a row of posts. For your orientation, read yesterday’s post which introduced Dark/Web, the 8 chapter (episodic) series on Amazon Prime, to read now click Pilot.

Today’s chapter implied a gruesome scene, so be warned. Though it wasn’t visual gore, the hint of it might trigger some, especially women who have been victimized by violence.

For others, able and willing to view evil head-on, this review is for you.

Molly Solis is drawing her friends together to solve a mystery around the dark web. She is sending them messages via email. Each message is a story. The viewer has met Molly in the pilot during the first few minutes. She appears on video camera, in trouble, though not helpless. The audience does not know much more than that, though they see her capitulate to some kind of authority, despite her protest.

In the first chapter, Ethan, a reporter and old highschool friend of Molly’s reads a story emailed to him by her. The action on screen quickly cuts to the “episode”, which shows the story as it unfolds. The first story is about a ride-sharing app gone haywire.

This second story is called Hacked and comes to Sam, who happens to have dated Ethan recently, though they are currently broken up. Sam is another highschool friend of Molly’s.

This story is about Misty, a young woman working at a burger joint. She is the drive through operations person. When a famous music star drives through to buy burgers, flirts with her, allows her to take a selfie with him and posts this on a platform called Flash, our heroine becomes instantly famous.  Her social media account explodes with likes and loves and comments. In this fictional world, not too unlike ours, Flash determines whether you are a worthwhile human. When your ranking goes up, as it does for Misty out of this incident, that makes makes her popular by society’s standards. Following this happy event, Misty’s phone is hacked and a reckoning ensues. Bad actors zero in on her to take advantage of her popularity.