6 Reasons You Want to Watch Severance 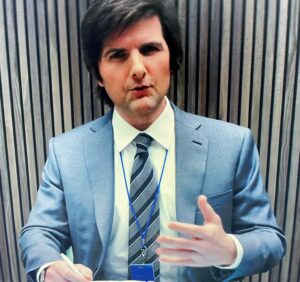 SEVERANCE is an Apple+ production, the first season is complete, streamable now and free for subscribers.

Created by Dan Erickson and directed by Ben Stiller, SEVERANCE is not a comedy. It falls into dystopian mystery with a scifi vibe. A futuristic technology at the center of the story, allows those who work at a company called Lumon Industries, to surgically divide their memories between their work and personal lives. Those individuals are called The Severed. Most of the other tech is familiar and not so modern, for example, people still drive cars around the town.

I give this series a PG rating…it’s possible it will warrant a different rating later on, but so far the mystery is more Hitchcock than Ridley Scott. My ratings usually reflect the graphic nature of the show and not the themes which in this case are harrowing for my adult brain. Would kids enjoy the show? Probably not. You won’t see explicit gore, but you will feel tortured for these characters at the center of the story, in part because of their vulnerability, which is childlike. The value in watching it with your teen would be to discuss the ethics that emerge around the tech that is at the heart of the story. 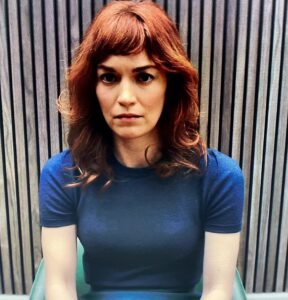 Britt Lower as Helly B

Regarding the setting. There are two primary “worlds” in SEVERANCE that exemplify the two worlds inhabited by the employees of Lumon.

One setting is work, the Lumon Industries office building. It feels familiar upon entering, but creepily weird the deeper in you go. The interior design is sterile, with strangely vacant work spaces and long labyrinth-like hallways. The four employees the audience follows most closely work in a large white room with no windows or access to the outside world. They are forbidden to interact with employees from other areas of the building and spend their days huddled around computers doing a job that the audience sees, but doesn’t really understand. In fact, even these employees don’t fully understand what they do, how they do it and why. It’s described as something they feel. Their work is just one of many aspects of this situation that give rise to a suspicion about Lumon. Most of the workers, including Mark (Adam Scott) submit to the rules of the company. There are a few exceptions and those exceptions give rise to Mark’s suspicion about Lumon.

The second world is Mark’s town. This is a cold, dreary place. It feels like it could be Alaska or Canada and is probably unfamiliar to most of the audience. The cold and the dark and size of the town adds to the feeling of claustrophobia, something that permeates this story. Darkness also dovetails with the theme of grief. In episode 1, the audience learns that Mark’s reason for severing came about because of the death of his wife. Mark lives in a housing complex owned by Lumon where it becomes clear, he is monitored unbeknownst to him. 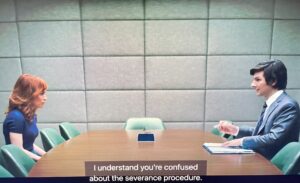 Mark tries to reassure Helly B. who ain’t havn’t none of it

My recommendation to watch SEVERANCE comes with the caveat that I’m still not sure where the story is going. I have viewed the first season and loved every episode. Not everyone enjoys a slow build to a gripping climax, but I do when it’s done well and SEVERANCE does it well. So, if you’re tempted to stop after episode 1 or 2, don’t. The tension ratchets up and up and mysteries become creepier as the conspiracy is partially unveiled.

In my next post, I hope to discuss summer reading which will include: