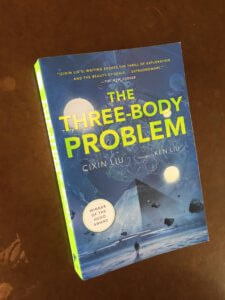 The Three-Body Problem by Cixin Liu

Last month, my science fiction book group tackled THE THREE BODY PROBLEM. We used our 1.5 hours of group time discussing story-telling and physics. (We’re lucky to have a physics PhD in our midst. We’re luckier still that he makes a mean brew and brings us amazing pints of his beer creations each month.) Next time we meet, I’ll post a photo.

What ought I say about this epic tale? THE THREE BODY PROBLEM portrays a number of characters, most of them well-drawn. The story unfolds with tension, there is a mystery to be solved and the complicated physics concepts embedded in the tale are true science. A virtual reality in the form of a game played by one of the main characters, becomes a key to solving the mystery. The world the game introduces is imaginative and entertaining.

This novel is originally written in Mandarin Chinese, which means (unless you’re a fluent reader of Mandarin) you will read a translation of the original. Welcome to the 21st century, where story-telling centered around the English language will likely diminish, but not to our detriment. As story consumers, we’re living in the best of times.

And, in case you wonder about this tale’s place in the science fiction universe, THE THREE BODY PROBLEM won the Hugo Award in 2015. Moreover, Amazon has recently purchased the rights for adapting this novel for the screen (and the two that follow it) for 1 BILLION dollars. Yes…you heard me, 1 BILLION dollars and yes, this is the first of a trilogy (so far). Here is the link that tells the tale of the Amazon deal for those of you interested.

According to various entertainment news sites, Amazon is looking for the next Stranger Things or Game of Thrones that will add them to the mix of superior content providers. They are competing with Netflix, Hulu, HBO and now Disney Plus et al. for content. THE THREE BODY PROBLEM and its subsequent novels define superior content. Moreover, the trilogy so far (maybe it will expand as GOT did?) maintains a devoted fan following in China and across the globe, many, many millions of potential viewers who might become Amazon Prime members. You can begin to see the appeal to Amazon’s dealmakers.

So…with all that hype…what is my review of this story?

The Storytelling and Teasing out Who is the Main Character:

First, I will say that most of the members in our book group loved the novel overall. Some liked the story-telling, others did not like the style. The narrator is omniscient in a way that is sometimes disorienting, at least for the western reader. There are jump around moments when the point of view shifts somewhat abruptly from one character to another, from one time period to another, even to one solar system to another…I consumed the book on audio while on a road trip, so it’s possible I was more disoriented than if I had had the book in hand. The chapters often mark the dramatic scene/world/time changes. I was hearing them and not seeing them. There is something stark about viewing the blank page and a chapter heading. It triggers the eye, therefore the brain to prepare for the change. In the free-flow of audio, I don’t think my brain was always cluing in. I hope to write a post about audio books and their rise in our book consumption in the coming days.

Here is an example of the point of view shifts that will take place in this story. At the end of chapter 12, the reader moves from Red Coast Project site 1970s to chapter 13, where a series of selected documents are flatly divulged to the reader at a time in the future, as if the story-teller is showing us files, giving information about Red Coast Project, previously top secret…then, back to chapter 14, present day novel time, when a main character Wang Miao interacts with Professor Winjie, someone who worked for many years at Red Coast Project.

Wang Miao, a nano-tech researcher, is caught up in the mystery and trying to understand a complicated tangle of events taking place in the scientific community around him, including a number of prominent physicists committing suicide. He interfaces often with Ye Winjie throughout the novel, a retired physics professor, whose daughter is one of the physicists who has committed suicide. Ye and Miao are both primary characters. Miao is the most relatable character. He is trying to solve the mystery. I won’t call him THE main character only because from a story standpoint I understood Professor Ye Winjie to be the main character. The book begins and ends with scenes that involve her and/or her family, but Wang Miao is central to the unfurling of the mystery. He performs many acts that are crucial to the plot development, including, he plays the virtual reality game. The reader sees the game world and game characters through his eyes. So, who is the main character? It’s debatable…but between these two, I think it is Ye Winjie.

The main actors in THE THREE BODY PROBLEM are almost all physicists and/or mathematicians and they’re nerdy, but not dweebs. Read chapter 5, A Game of Pool if you want a taste of what the novel offers. The virtual reality world and the three body problem puzzle played often by Wang Miao make known the game planet of Trisolara. In the game, the reader walks through the history of physics because Trisolara has three suns and has to solve that problem or else, face destruction (which happens a number of times as Miao plays the game). The game players, along with physicists throughout history try again and again, in a systematic way, to solve the problem. Regarding the game and how it serves the story, I will leave that for your discovery.

Another aspect of storytelling that might disorient or bother the reader is the information dump that seems to happen periodically, like in chapter 13 as I mentioned above…also in chapter 25. An interrogation of professor Ye in this portion of the narrative ends up explaining a whole lot of back story. It’s not an awful dramatization, but so much information is divulged in one convenient scene, it would likely be deemed sloppy writing by many authors/literary critics…but hey, the question is…will you quit reading because of the way the information is delivered to you? I’m guessing the answer is no, you won’t quit. These info dumps happen throughout the novel and answer pieces of the mystery. The style of writing is probably not enough to stop the average reader, though one may be tempted to skim these sections.

Overall, THREE BODY PROBLEM is an entertaining and important read for the science fiction consumer, with a few new twists on an old scifi story that surprises and deepens the global tome that tries to envision humanity’s future.

For ideas on how to use this novel in class with students of math, science, philosophy or ethics, see my post: THE THREE BODY PROBLEM, For Educators or click here.

To buy the second book in the trilogy: THE DARK FOREST, Remembrance of Earth, click here.

To buy the third book in the trilogy: DEATH’S END, click here.

To save yourself a bundle of dollars and shelf space, buy the trilogy on Kindle here.