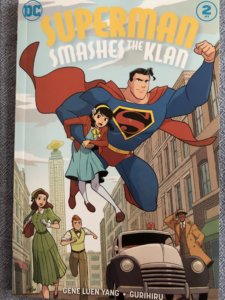 SUPERMAN SMASHES THE KLAN Part 2 hit comic book stores in December. It’s over a month old and I have been delinquent in reviewing it, until today. This story is appropriate for just about all readers. Rated PG.

For a review of Part 1, see this no spoiler review

Warning: This review will have spoilers if you have not read the first installment.

Inspired by the 1940s radio series Clan of the Fiery Cross, Gene Yang picks up the cliff-hanger from part 1. In part 1, Tommy Lee, a Chinese-American boy has been abducted by a white supremacist group, Klan of the Fiery Kross. 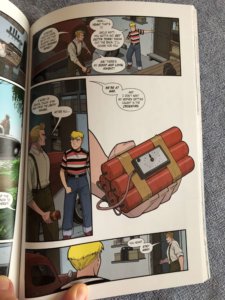 Yang does not sugarcoat the violence of the Klan

The aim of the Klan is to tar and feather Tommy, therefore teaching his parents a lesson. They resent the Lees moving out of Chinatown and into their white neighborhood. The Lee family has made this move because Dr. Lee, Tommy’s father, has been offered a job in a nearby lab.

All the storylines ratchet up a notch in Part 2.

Overall, this is a great middle to the story. I look forward to reading the finale, Part 3 when it is released on February 19, 2020. 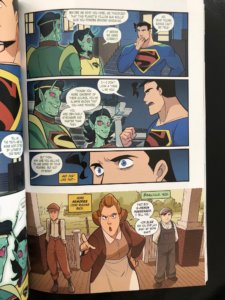 A note on the art: The art in the series, created by Gurihiru, is colorful, capturing a blend of retro and anime. It seems apropos that this Japanese female duo would create the artwork for a comic grappling with some of the first Asian-American characters portrayed in a sympathetic way in the American Comics Universe.