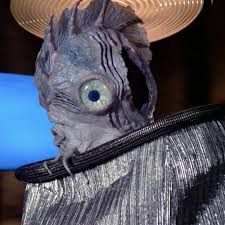 The Antedean on Star Trek

A Study of Non-Humanoid Characters

Since my second viewing of the film, ANNIHILATION, I have been musing on my own sci-fi writing, thinking about how difficult it is to portray non-humanoid aliens in a novel, even more so on the screen or stage. The audience may not ponder this, but sci-fi authors grapple with the problem every time they sit down to write.

If you do a google image search of Star Trek aliens, you’ll see what I’m talking about. Scroll down and down and down to view many colors of skin, odd make up and costumes, but most of the images you see will be faces that look a lot like human faces. In particular, those aliens that become super villains are almost always humanoid…Klingons, for example. Why do Star Trek writers/producers seem to prefer the humanoid alien?

When telling stories, facial expressions and body language hold meaning. When my editor asks me to show and not tell in my story, I rely on movement, posture, actions as well as dialogue to show character. So, if my alien is a purple blob that does not speak human language and is flying a space vessel into lower Earth orbit for the first time and feels anxious, how do I show the reader its anxiety? My editor will scold me if I write: The blob creature was anxious as it flew into low Earth orbit? This is an example of telling and not showing. Substandard writing. She wants better and I pay her for that advice…so how does a writer manage? Maybe I decide the blob alien doesn’t have any feelings. It’s machinelike. I don’t need to show anything beyond the flying. That option is backed up by the way human beings often view the other, whether alien or human. That’s how people objectify the other.

It/he or she feels nothing = I feel no connection = I don’t relate = I can despise it, him, her.

The not-feeling portrayal of the alien works sometimes. A number of successful sci-fi stories deliver to its audience the alien as monster, a creature or entity both sinister and destructive. The Thing as well as the first Alien films are good examples. Both follow the script of the haunted house drama. Humans are in grave danger, trying to defeat a monster that has found its way into the sacred living space. It will use up and in the process destroy all the good guys, unless the good guys destroy it/them first. The monster is objectively all evil.

What about non-human characters that might not be all evil?  Those are of interest to me as they are to many other sci-fi writers.

Back to the purple blob.

So, how would I portray the anxiety in my  blob character? Maybe I show the blob sweating while it nears planet Earth. Okay…that won’t work. How about a trembling blob? Would my audience interpret a trembling blob as an anxious one? For all they know, the trembling is a physical reality of a ship entering Earth orbit. You see the problem, which brings me to R2D2. 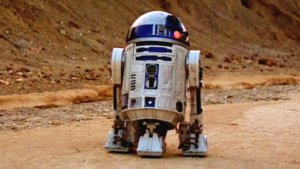 R2D2, not an alien but wildly different than a human, holds one answer. Recall a number of Star Wars franchise films. R2’s personality makes his mark in all of them and does so as a non human…How do the writers pull this off? How does R2 connect with the audience, which he does in a big way? (Note: in the Star Wars universe, all droids are programmed male or female. R2 was programmed “male” which is why I use the male pronoun when referring to him.) How do we know R2 has feelings when he can only bleep, squeal, whistle, spin its carapace from left to right, roll here and there and lunge back and forth on his three-wheeled legs? He doesn’t have facial expressions, arms and doesn’t even speak a human language, but the audience, especially children, feel a connection and an affection for this character. Why?

Dig deeper into the screenplay of the earliest film…Notice how humans, Luke and Leah, or another verbal and humanoid robot, C3P0 interpret for the audience what R2’s squeals, bleeps and actions mean. The audience sees and hears C3P0 responding to R2D2 in STAR WARS, A NEW HOPE and comes to understand the determined personality of this character.

Here’s an early R2D2 scene most of us are familiar with…the droids have just crash-landed on Tatooine and are journeying together across the planet’s desert-like dunes.

C3P0: What a desolate place this is…

C3P0: Where do you think you’re going? Well I’m not going that way. It’s much too rocky.

C3P0: This way is much easier. What makes you think there are settlements over there?

C3P0: Don’t get technical with me. What mission? What are you talking about?

C3P0: I’ve just about had enough of you. Go that way. You’ll be malfunctioning within a day, you nearsighted scrap pile!

R2: (turns to the left and begins heading in a different direction than C3P0)

C3P0: (calls after a departing R2) And don’t let me catch you following me and begging for help because you won’t get it.

Clever writers! This is one way to give that bucket of tin a whole lot of personality…put him alongside another verbal character who will always react emotionally (even though he is a droid, who of us would deny that C3P0 is highly emotional?) and interpret bleeps and whistles for the audience. After a while, the audience doesn’t even need the interpretation. We begin to hear the difference between a happy squeak or whistle and a sad bleep.

Back to the purple blob. If another humanoid is flying co-pilot and happens to speak a human language…now I can have the co-pilot respond to the trembling.

Purple Blob: (trembling as flames erupt around the nose of its space vessel)

Purple Blob: (squishes 2 hoots and a few groans out an opening on the side of its gelatinous body.)

Humanoid Co-Pilot: Well. I can see why you would be nervous. The gravity on this planet is stronger than we thought, but our heat panels should protect us.

Humanoid Co-Pilot:  I’m just glad it’s you flying a not me.

That’s it for now. Thursday, I’ll tackle the fantastic aliens in the film and short story, ARRIVAL.