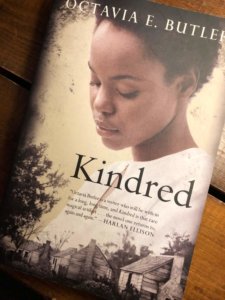 KINDRED, perhaps the most admired novel written by the late, great Octavia Butler is a nearly perfect novel.

Dana, whom the reader affixes to very early, is an African American woman, married to a white man living in the 1970s. She is living her life in the present as a happy person. Suddenly, she finds herself yanked back into history. It takes her a while to figure out why, but eventually, she and the reader understand that every time one of her ancestors (a white slave owner) finds his life in danger, Dana is summoned to the past. This happens multiple times. Dana comes back into real time when she finds herself in danger of being severly injured or killed. The going back and forth is painful, but an interesting narrative device. The reader, who empathizes with Dana, finds these short respites back in the modern era as hopeful and yet terrifying because the readers knows, as does Dana, that she will be yanked back in time within minutes, hours or days of her respite. Her oasis in the modern era taunts the reader and gives the reader pause. At least in part, our society has grown out of the horrifying reality of slavery. That reality cannot be denied, or at least it is harder to deny when the reader is identifying so powerfully with this main character.

Dana, because of her experience of liberty in the 1970s as a black woman, becomes a guide to those in the past. She has agency, yet because of her skin color, she is also threatening to everyone who exists in this past world, including the slaves she will try to help.