Molly, in her hideout

My 8th post on this particular Amazon Prime series. I reviewed chapter by chapter (episodes are called chapters). For a review of the pilot, click Chapter 1.

Today I viewed the finale.

Question that arose…Will DARK/WEB will have a second season? Will there be enough interest? I have no way of knowing. What I can say is this…

There is a kind of resolution that takes place in this final chapter.

The ending to this series felt overly ambitious and contrived…a lot of explaining right at the end to tie up all of the loose ends. Sometimes the characters acted in a way that didn’t make sense to me, didn’t see human, but served the overall plot. I always get frustrated when this is the case. There is a campy nature to the series, maybe this is part of the fun…perhaps another horror trope? However, it also takes itself VERY seriously at times, so I was trying to take it seriously too and sometimes the camp did not match the tone of true evil that was being portrayed.

However, I will give the series lots of chops for these elements:

Overall, I recommend DARK/WEB if you have the stomach to watch horror/scifi.

7th and Penultimate Chapter. My 7th review in 7 days.

This review will contain spoilers for earlier episodes and minor spoilers for this episode (episodes are called Chapters), so be warned. Go back to menu or click PILOT if you want to read an introduction to the series.

Who is watching through the computer screen?

I’ll say a little about the structure of the series at this point.

The story creators of DARK/WEB have given their series this title for a reason. It is documented that the secret and more anonymous world of the dark web exists and exhibits the worst side of humanity. If you are squeamish or needing something more uplifting as entertainment, please be warned. We all know that there are many good people in our world (and that even the “evil” people have potential for redemption…at least I believe that) and most of us hope that the good will ultimately triumph over evil by the tale’s end. We will see…

Major backstory episode for the larger story arc, which I appreciated. It was the right time to give the audience more reveals. This review will have spoilers of the previous Chapters. For an introduction to the series and no spoilers, click the Pilot.

Pictured is Zach Sullivan before he has his mental break. In chapter 4, he is visited by Ethan in the mental hospital, so the audience meets him well after this scene with Molly. One suspects something bad went down at the job because in the hospital, he freaks out when a phone is brought near him. He and Molly were colleagues at Citadel, the computer/systems security company. Somehow, all roads are leading to Citadel…or are they?

Molly and Zach rely on one another for help with coding (actually…Molly may be the smarter of the two, though Zach has been at the company longer). As they lunch together at work, Zach and another coder tell Molly about Citadel’s secret project called MIHR. Zach is applying for a new job in the company and is hoping he will make the MIHR team.

Zach does get promoted and he does write code related to MIHR. He also stops having friendly lunches with Molly and appears exhausted and unkempt. Eventually, when Zach needs her help in solving another coding issue, she and we encounter MIHR.

This chapter is not gruesome and gives the audience a chance to know Molly better, the character at the center of the mystery.

New interesting character introduced in this episode. Her name is Kim Rider, she is an online friend/love interest of Molly Solis’. (This involves the 8 chapter story arc, not the individual stories). 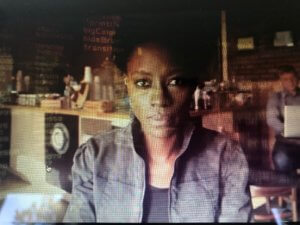 My review is the 5th in 5 days, well, almost…I took Sunday off. If you have not read my introduction to this series, I highly recommend you read my first posts, all four, but especially read the 1st one. Click Pilot.

Rider is helpful in explaining the overall arc of the series. She is connected with Molly Solis, emotionally/relationally and also happens to be fluent in computer hacking and understands a little more of what Molly was dealing with right before she disappeared. Rider becomes a teaching character, someone who can explain a couple of mysteries and ask better questions. She’s also lovely, black and British.

The story that Molly’s group of friends encounter is itself another gruesome tale. You can judge by the title which is the first line of this post.

Now that Kim and Molly’s high school friends, Ethan, Sam and James are together on the scene of Molly’s home in Texas, there is finally a concerted effort to figure out how Molly is in trouble.  Sometimes this setup feels a little cheesy and contrived, but there are a few real and funny moments.

Also, I need to note:

This episode includes gore and even though it isn’t super explicit, the suggestion is true horror. 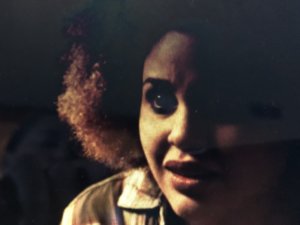 DARK/WEB is an Amazon Prime series. Here is my overview of the pilot. To read, click Chapter 1.

I have watched half way through DARK/WEB. Chapter 4 furthers the overall narrative arc. Zach Sullivan is visited by Molly Solis’ friends. They also go to visit her house in TX. She had been living there until she disappeared.

This chapter also adds another hint, another one of Molly’s stories sent to her friends. The story is more mysterious, mystical and spiritual, involving an illegal, dark/web for profit organ transplant operation. 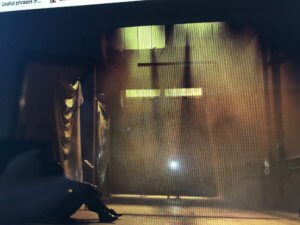 I won’t say too much about this chapter to avoid spoilers. It’s not nearly as disturbing as Chapter 2, but my sense is the creators of this series are wanting the audience to ponder what evil exists on the dark web…the actual dark web.

I confess…as much as I resist watching this series, I know that many aspects of it are true and because of that, the overall narrative is disturbing to me.

Hat tip to Roxy Shih, a female Asian American director who is brilliantly putting this important story before our eyes. This visual of the man sitting in the warehouse with the light coming through the high windows is particularly gorgeous. Notice the crucifixes in the shadows. Excellent symbolism. 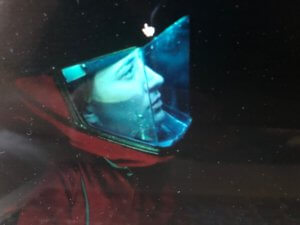 In the next eight days, I will watch one episode per day (episodes are called chapters in this series and there are 8 total). I will review each one briefly.

Today I watched the first chapter. This story had a few layers. I read a little about the series on IMDb and Wikipedia to orient myself….here’s the IMDb link if you want to do that too.

Is this really Amazon Prime’s answer to Netflix’s The Black Mirror? Some say this is the model for DARK/WEB, but there is an overall story arc that connects all of the chapters, so not exactly like The Black Mirror. I’ll know more in a few days and can report then.

This series is one season only. As of now, there is no indication that a season 2 will be made.

Written by Mario Miscione, Boman Modine and Michael Nardelli, the story begins with a mysterious set of images and screens where a young woman is obviously being harassed via the internet to do something (we don’t know what) she does not want to do. It then cuts to the apartment of a recently laid off reporter by the name of Ethan Neary. He is obviously in a bad spot, sleeping on his sofa, drinking too much, his apartment a mess. He has missed a number of calls from a high school friend (Sam Daniels) who has been trying to contact him. Sam is anxious about repeated emails that have been sent to her from another old high school friend, Molly Solis. Ethan has received messages as well. Is this really Molly? They are both worried about computer viruses, therefore reticent to open the file, but Ethan decides to open the attachment, which reveals a short story that he ends up reading aloud over the phone to Sam…the read aloud cuts to new action, but with different characters.

At this point, the story being read becomes what the audience sees on the screen.

Chapter 1 of DARK/WEB is about a rideshare driver who experiences a glitch in the app supposed to help him perform his job. Now, instead of simply giving him directions, it talks to him about who all the people are he is driving. He’s driving late at night to make ends meet for his young family and it turns out many of the people he is driving are awful folks. The rideshare app knows details about their evil and begins directing him to do certain things to stop these people from exerting their power in ways that will hurt others. You can imagine where this might go.

I won’t give anything away, but the viewer does become invested in the driver’s wellbeing and that is an indication of good character writing. It happens fast that the viewer is rooting for him. Chapter 1 was worth the 27 minutes. I recommend if you like tension and dystopian/cyberpunk/mystery.