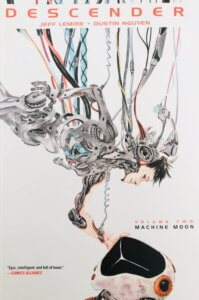 MACHINE MOON did not disappoint. The stage is set and the characters are on the stage (although I’m sure there will be a few new faces in coming volumes) and the heat is cranking up for an epic conflict. In volume 1, the reader is introduced to Tim-21, an A.I. of extraordinary talent, intelligence and empathy. Tim-21 was created by scientist, Dr. Jin Quon, as a companion for humans. The hero, depicted as a gentle-spirited little boy, wakes after 10 years of sleep. He had been companion to a human child and living with him as a brother on a remote mining colony. He wakes to find hundreds of corpses of human miners, dead now for 10 years, and two other robots, lesser A.I. models still active. Following Tim-21’s awakening, the Megacosm made up of nine planets, becomes aware of his presence. His particular intelligence chip is perceived as having brought about a disaster which has wiped out much of civilization. As a result, Tim-21 is targeted by a number of powerful factions who want to destroy him or use him to gain power. He has few human allies, though a couple seem to be emerging. Moreover, his relationship with robotkind turns complicated in this second volume. The reader roots for Tim-21 knowing he is a pawn for nearly every other character, which adds to the tension and the page-turning nature of the story. 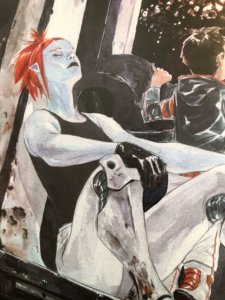