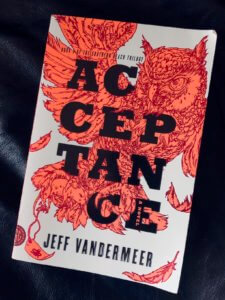 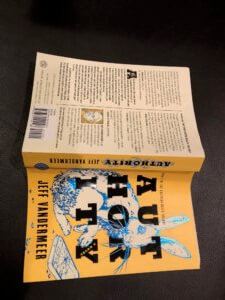 Book 2 of The Southern Reach Trilogy

AUTHORITY, by Jeff VanderMeer, A Book Review Without Spoilers.

First,  A Little Data About this Book Review

I Give this Book a Semi-Enthusiastic yes. Read AUTHORITY for these reasons:

So…if AUTHORITY was a stand alone novel, I might not write a stellar review and I would give up on reading any other VanderMeer novels, but since I loved ANNIHILATION so much, I will read on. If you’re curious about my review of the first Southern Reach novel, click here for the ANNIHILATION REVIEW

In AUTHORITY, the narrator is a male who calls himself Control. His birth name is John Rodriguez. He is the new director of the Southern Reach. In an early introduction, he insists that his colleagues call him Control. I realize the title of this novel is AUTHORITY and that the book is much about who has authority in the confusing situation that is taking place in and around Area X. This was another reason I was annoyed by John Rodriguez’s moniker. It felt like the author was trying to make me think in a certain direction and less about a person. I didn’t like that.

Control seems like a weirdo, socially. I was not fond of his narrative voice, nor his behaviors or leadership. Control does not compel me. I feel a distance from this character that I think I’m supposed to feel compassion for. Since the story is being told by him, in the first person, I can’t get away from him. I would have stopped listening had I not been told by a friend that the final book and the whole arc of the three books make sense when you finish them.

Despite me not feeling a connection to this narrator character, I can see why author, VanderMeer, changes perspective in this book. He wants the reader to receive another view into Area X. That which is mysterious and difficult to describe, much less understand in Area X, is seen from another angle in this novel. Control provides the US military/intelligence/bureaucratic angle as well as some recent history.

Given that the reader knows the content of ANNIHILATION, that Area X has consumed a number military and government expeditions, the background is helpful to the larger story.

But, for me, the main silver lining around this new narrator was that the reader finally received a physical description of the narrator and protagonist from the previous book.

“The biologist’s hair had been long and dark brown, almost black, before they’d shaved it off. She had dark, thick eyebrows, green eyes, a slight, slightly off-center nose (broken once, falling on rocks), and high cheekbones that spoke to the strong Asian heritage on one side of her family…”

This description does make me bummed about the filmmakers of ANNIHILATION casting the biologist for the cinematic story as a white woman (Natalie Portman) with zero (or near zero) Asian heritage. Bummed for many mixed-race actresses out there who did not get this part.

I will listen to the next book, AUTHORITY, on Audible. I hope to enjoy it more than this middle novel.