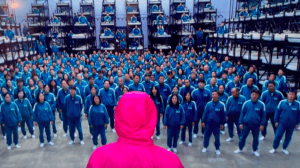 Netflix has done it again. It has found another international gem, this one created by South Korean writer/director, Hwang Dong-hyuk.

I had barely heard of SQUID GAME until about a week ago, but now the buzz is everywhere. If you’re like me, you’re wondering…Why all the hype about this Korean dystopian series?

So, last night, I watched the 1st of the 9 episodes and love what is being set up. This episode features a giant robotic girl that rules over a game of Red Light Green Light, also the episode’s title.

Here’s what I can say about the opening. 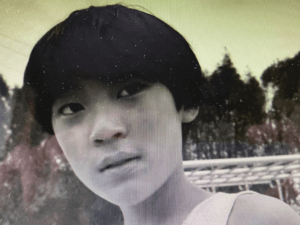 Seong as a child

SQUID GAMES would probably receive a PG-13 or maybe even an R rating for violence. I am watching the dubbed version. The dubbing hasn’t bothered me.

There is a dystopian flavor to the story and the world, but its reality is not so hard to believe. What I mean by that is that the game world is not fantastical, nor is it futuristic. This game could be happening today on an island somewhere. The audience does get a shot of the island in episode 1, as well as the back of the billionaire maniacal overlord, who watches via screen as the contestants compete and try to stay alive. 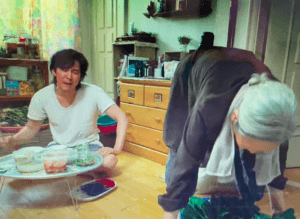 Creator, Hwang, worked for ten years to get SQUID GAME made. The traditional studios wouldn’t touch it, but alternative streaming is proving again, that fresh stories are out there, often outside the Hollywood bubble. Cheers to Netflix in particular for curating and promoting dramas and comedies we would never otherwise see.

Click on the links below for more of my reviews of “outside the Hollywood bubble” stories that deliver. The first two are also Korean-made

KINGDOM, A Review of a Korean-Made Masterpiece

TRAIN TO BUSAN, A No Spoiler Review

Review of THE RAIN, Season 1